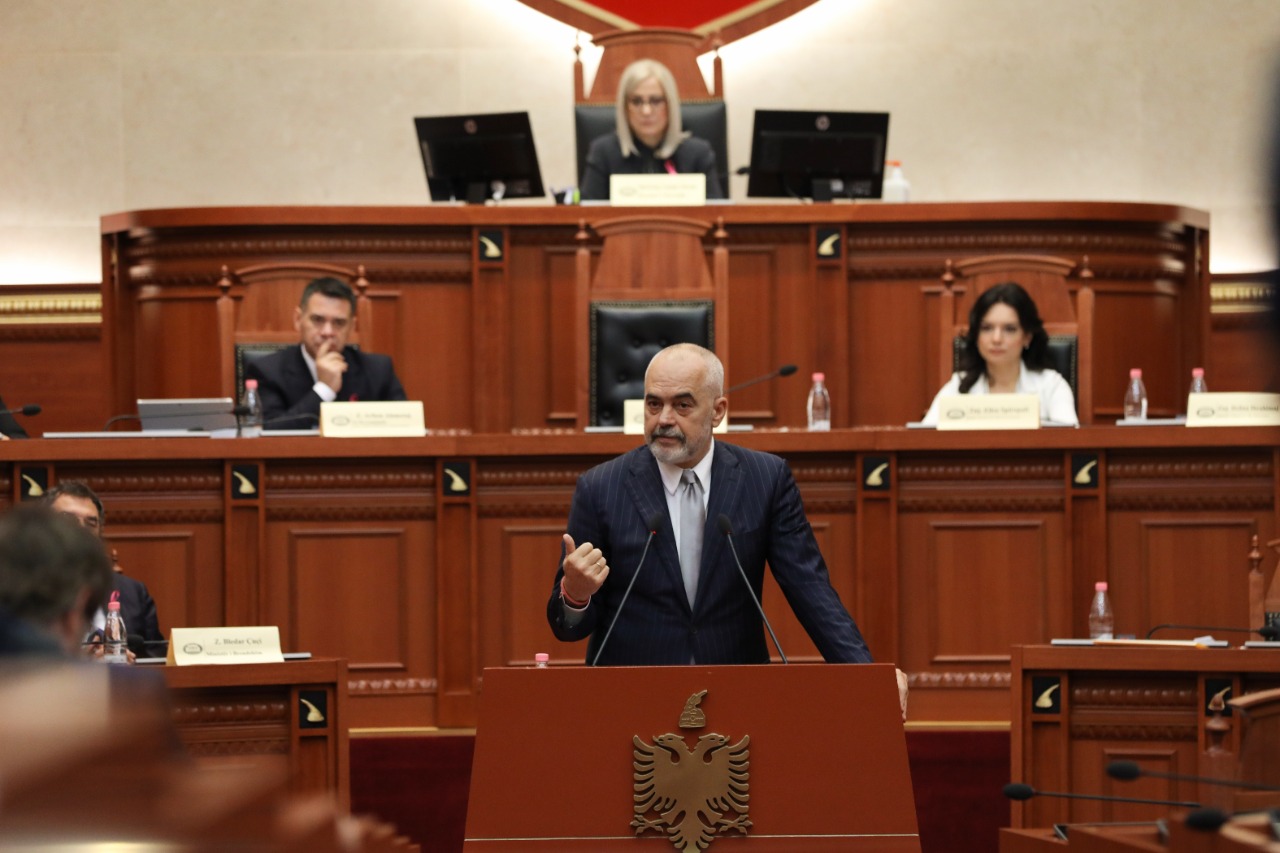 First of all, it is really regrettable to hear this logorrhoea instead of “the good morning greetings after being the last to come into this hall, Mr. Lulzim, and I have repeatedly told you publicly, I have also told you in person, stop imitating the one recently holding the so-called “the Pulpit”, because the original is always more reliable than the copy. The more you yell imitating the Pulpit’s character, the more you resemble to the weepers character. A man who shrieks using the sort of words that as parent would definitely tell your kids to never use them, but on the contrary does so among 139 other men and women and in front of the eyes of God knows how many people watching us is actually a man in deep trouble. However, no matter how deep is your trouble, though we feel sorry about it, we are unable to help you out and resolve it.

Meanwhile, referring to what some claimed here and since they cited the International Monetary Fund (IMF), this is the concluding statement of the IMF mission and I am quoting it briefly: “Albania’s economy has shown considerable resilience in the face of the 2019 earthquake and the pandemic. After a terrible 2020, activity is rebounding strongly.”

The concluding statement also notes: “With a renewed mandate, the government is well positioned to address these challenges and enlist the support of all stakeholders in society to that effect.” Further on: “Following a contraction of 4 percent in 2020, the economy is rebounding strongly by a projected 7.8 percent in 2021, spurred by continued monetary and fiscal policy support, reconstruction, reduction in movement restrictions.”

You can take note today that the economic growth in 2021 will be over 8%.

It is the same thing you keep doing since entering this very hall in your capacity as the opposition leader, namely doing the same thing over and over again and expecting a different result, but you actually receive the same result and you keep doing the same thing over and over again. Today you repeated the same thing again, telling Albanians that we are seeking to borrow another debt of 200 million euros, while a week ago you told citizens that the electricity price was increased, just like you told them today again, playing the role of the crier and announcing a non-existing crisis. You actually didn’t repeat today that the prices have soared in Albania only, because prices have increased everywhere and since you cited Kosovo at the previous session, but not today, I am telling you energy prices in Kosovo, North Macedonia, the United States and everywhere else and whole world is talking about a global and not a local crisis. It is a crisis that has affected small and great powers, it has affected haves and have nots  and it is my duty – this is something I have been doing and I will always do – reach out to people openly, especially when the country faces a crisis of this kind.

No, the crisis is existent and we will all see in the coming days that not only the energy price has increased exponentially, but the problem many countries are currently facing is the lack of supply vis-à-vis the demand. That means you might be ready to pay more, yet you can’t succeed in procuring whole amount of the required electricity to meet the domestic demand.

The 200 million euro fund as part of the government’s plan to tackle the crisis is not a debt, but an instrument of sovereign guarantee that has been made available to protect Albanians, not to let Albanian citizens bear the brunt of the crisis, and not force Albanian families pay the increased cost. It is as simple as that. We have to deal with such situations and the theory suggesting that everyone should enjoy protection – you even drew attention to the big entrepreneurs too that you called them oligarchs and then call them employers and they too, according to you, should be protected. Of course, everyone should enjoy protection, but where one can find the revenues needed to protect everyone? However, this is a completely different topic.

We are preparing and a broad national consultation with Albanian citizens will begin very soon to determine who should bear the brunt and how the burden of this crisis should be distributed.

You went on saying that “the public debt has spiralled out of control.”

How did you jump to such a conclusion?

We will turn to the international capital markets soon. If our country’s was to be out of control, then we would not be able to secure any funding from the capital markets that don’t care at all about what your name is. It is not about a debt, but funding and liquidity. This is going to happen very soon and you will see for yourselves that Albania not only will be granted the funding it will apply for, because, as the IMF notes “Albania is a risk-free factor in the capital markets today.”

Albania is no longer in the state we inherited when you left office, when nobody provided funding to the country and you were forced to resort to fantastic acrobatics like the one you did by selling Hotel Dajt to the Bank of Albania. You were desperate with the rope around your neck and sought to raise even an inconsiderable amount of 30 to 35 million euros. Let alone the energy sector that you had destroyed to such an extent that no matter what we do – trust me, you should impose a silence moratorium on yourself and refrain from commenting on the energy sector in the next ten years, when you all will no longer be part of this hall. It is only then when the opposition can talk about the energy sector again.

You keep telling the same old story in a bid to fool Albanian citizens. But you keep making the same mistake and always keep receiving the same response and each Monday, a day after the elections, you wake up surprised and wondering “how come?” and then start over by claiming over “massacres”. What massacres?

You tell Albanians “we are selling electricity cheap and purchase it at a very high price.” Of course, this is not a secret. This is a public fact. Not only now, but this has been always the case since we embarked on the path of building democracy following the collapse of communism, all for a simple reason; we still lack the capacities to deposit water reserves beyond the limit of the dam’s security. In the case of torrential rainfall, with the water inflows growing over the security limits, we are forced to discharge the excess water. You have done so too, even causing catastrophes because of your incompetence. But, totally different from you, we took the Skavica hydropower plant from the drawer and Skavica HPP project is no longer a dream, neither an electoral promise, as you have claimed any time campaigning, but it is a project already underway in collaboration with the United States. Construction of Skavica HPP and building the capacities for a huge water reserve will help us to decide when to sell electricity, when the demand for electricity is higher.