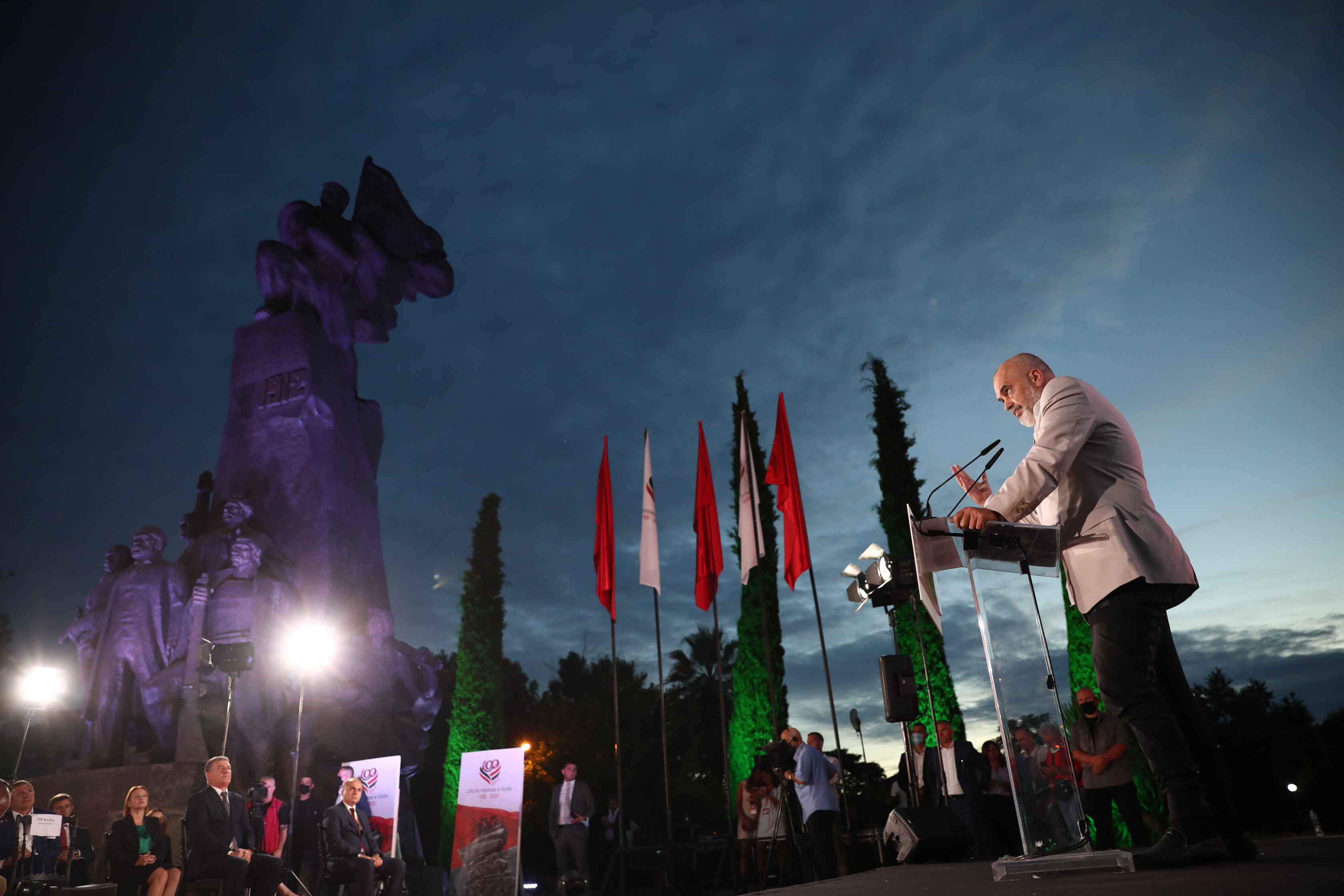 When Vlora’s Flamurtari football team beat Spain’s Barcelona in 1987, on of most successful clubs in terms of national international trophies won, our national press praised the iron communist organization in the face of the workers enslavement capitalism for the squad’s victory back then. Whereas in Spain, where genuine professional journalism was in place, the press described with particular admiration the saga of a poor, badly paid and unsupported team that managed to reap a victory that in terms of proportions was as impossible as that of David against Goliath.

Is there any correlations between Flamurtary squad’s success in 1987 and the goal scored by Sokol Kushta back then with Vlora War of 2020 and the leader of patriot fighters Selam Musai, which is the reason we have come together here today?

I believe the correlation between the two events is the analogy of the impossibility, which is in the very DNA of the blood of the Vlora people, as more than once, our common history has identified them as strange people with an amazing ability to transcend the boundaries of what it is possible and accomplish the impossible at certain moments. In fact, given its outcome, the Vlora War is one of the most remarkable wars in the world history of wars.

A war won by the warring side that was actually supposed to be defeated.

In his book “The Albanians”, the Albanian studies scholar and historian, Edwin E. Jacques, describes the impressive fanfare with which the city of Vlora dawned on September 3, 1920, a day after foreign troops left the country, or as it was known in the jargon of the time and as we learned from history at the time when history was taught with pathos: They were thrown into the sea.

“The military and civil servants planned a magnificent triumphal ceremony,” – Edwin Jacques wrote. They invited the music bands “Vatra” and “Aferdita”. Some 23 musicians from Elbasan headed to Vlora on horseback. The spent nights in various cities, but their triumphant entrance to Vlora stirred unparalleled emotions of patriotism and joy.”

The celebration went on for days with marches and patriotic songs, often accompanied by the interference of the songs of groups of soldiers, or even happy citizens. Because they finished work and everyone started part from each other, as usual.

But amidst the sounds of music, those whom the Italian press labelled “heroic shepherds”, the same ones who triggered the unbridled rage of an Avanti editorialist named Benito Mussolini, who dedicated a special article about the struggle we commemorate today as an event, two years before he himself rose to power in Rome, he realized something of a magnitude that no one understood exactly how it happened at the time it happened.

Tajar Zavalani, a prominent reporter at BBC’s Albanian language section for decades, after fleeing persecution from communism, explained in a book written in 1966 that “the Vlora agreement on liberating Vlora from the foreign rule was the first international document signed by the Albanian government as a sovereign power and on equal terms.”

This, according to Zavalani, had a beneficial influence on international position of Albania and accelerated its recognition as an independent state within the borders of 1913.

In other words, if the declaration of independence 8 years before the Vlora War showed the world that Albanians exist, it was the Vlora War that showed for the first time that the Albanian state existed and had the strength and opportunity to exercise inalienable and equal rights in relation to any other sovereign entities.

For this reason, the War of Vlora encapsulates those moments defining the organization of the Albanian state and in fact this makes us all to be indebted to the people of Vlora not simply and only for independence, but twice indebted due to the Vlora War.

Today on this jubilee anniversary is the time to pay tribute not only to the heroism of this event in itself, but also to the weight of this event, not merely as an act of opposition to a foreign force in a sovereign territory, but also as an act persistence, a forerunner to the building of an Albanian state, which at that time was still in its infancy.

As Teki Selenica writes in his book “Albania in 1927”: “History will rightly ask: what did they fight with?”

It was a group of people, because a regular army had yet to be founded back then. It could not be seen as an organized battle formation, because it was not as such, and this bunch of fighters was battling one of the most modern armies at that time.

And the answer – Teki Selenica says – is: “They fought with the heart of the Albanian and the soul of a nation that had decided to die to live.”

“Because they had nothing but some rusty rifles and some meagre ammunition supply and the Vlora fighters had carelessly worn their traditional wool felt wrap druid, food sack filled with a piece of homemade dried corn bread, a dagger in hand and a half shoes.”

Though outnumbered by 1: 5 in a battle against one of the world’s most modern armies back then, this crowd of people, motivated by something deeply rooted and magically united in one single cause, managed to achieve one of the most beautiful and most impressive victories in the history of battles and war strategy studied in specialized academies.

An investigation launched in by the Naples Appeal Court judge Augusto Ferraro in 1921 to look into the causes of the defeat, confirms that the Albanians’ triumph was as impossible as surprising. This was a lighting striking in broad daylight for the other warring side. This report shows something else that is worth highlighting here at this event. The increase in the bread price, but above all, the US intervention forced official Rome to end the military occupation of Vlora.

I am emphasizing this because it is a very special moment and I do not want to go deeper because it is neither the place nor my role to do this, but I believe that today is the moment to point out the fact that even during that war, even at that time, friends stood by Albania to help the country and prevent from happening what Ismail Qemali said from the balcony of independence: Albania risked again wearing the black dress of a mourning period. And it were exactly these friends who helped Albania earlier and in the aftermath of the Vlora war and without the unwavering staunch support of President Wilson at the Paris Peace Conference, despite the heroism of patriot fighters in Vlora, the Secret Treaty of London could have again laid the black robe on Albania. But the Americans were not content with the diplomatic support only, but they also rendered support through their free press, with the Vlora War making the headlines of Washington Post and Chicago Tribune, admirably describing Albanians for their contribution and heroic actions.

There were others too, including Pope Benedict XV, the immortal Edith Durham, Justin Godart, a widely renowned and respected in Albania, a small, or rather marginalized faction of Italian politics and even a part of Italian public opinion.  But among others there was also a very interesting character, who was on the other side, who belonged to the other side, an Italian marshal, Vincenzo Giovani, who prevented the explosion of the large ammunition depot that could have reduced if not the whole city, a large part of the city into rubble before leaving.

While listening to the Mayor’s speech, who addressed to the invited religious community leaders, I would like to point out the remarkable role the religious communities, churches, mosques and masjids  played, as well as many priests, vicars, parishioners, and imams, who are indeed an unknown segment, at least for many of us who have been taught about the history of Vlora as written by the winners of that very history that followed later in the years and today we know quite well that this entire category of contributors to the history of the Albanian people were left out as if they had never existed, because the call issued at any Albanian territory to join the National Defence Community at that time was led by the religious community leaders. They were, so to speak, the links of the only chain of institutions that supported and through their influence united the willing souls, precisely why revolted, of those who then became great protagonists and who rightly hold the first line of heroes of the Vlora War.

Another important element of the Vlora War, which deserves to be recalled and commemorated today, is the unusual participation of women in that war. Unusual if considering any other previous wars of the Albanians and not only direct, but it was the women who organized a network of jewellery sales to buy medicines and assist the fighters. Undoubtedly, all this does not make it more important at all, on the contrary, it simply shows what weight that nucleus of fighters who took over this madness had, if they were to start from a cold logical reasoning and that they did in reality, because it was a reasoning not by mind, but by heart. Definitely, the spread of the epic of this war throughout Albania gave rise to another lasting wave of creativity dedicated to this war, songs, in a reverence to Vlora war.

Or another verse, both famous and somehow scary: Together with friends he comes out of the trench, attacking like a mountain tiger.

In addition to songs, medals, fanfares, tributes and homage to the memory of martyrs, also in ceremonies like this one, the least we can do, I believe these events can be honoured through careful correction with as much objectivity as possible of mistakes that disturbed their souls a lot in the last century, but not only in the last century, that usually suddenly disturb their souls and I do not mean only the Vlora War heroes, but everyone, through the pen of people who without having the right attributes, without having enough knowledge and above all, without having enough sense of intellectual modesty, as Socrates called it, they intervened by misrepresenting history. Our misfortune is that we all share, – I am talking about my generation and of those a little older, but also of some a little younger – the misfortune of learning history written by the winners side. And unfortunately, the sin committed by a party that seeks to impose the written history through the logics of the winner didn’t end with the collapse of the communist dictatorship, but it was renewed in a caricature shape, way too less serious, yet sufficiently pervert, causing more damages and damaging another yet younger generation that was not so unfortunate to learn history forcibly in a biased way as told by the winners. I want to believe that people in this domain and institutions in this domain, not politics, neither the government, nor the opposition, but competent people who know what they are saying whenever speaking about history will gradually adjust many old and new deformations and distortions and gradually develop and forge for everyone else, including politics, a sense of respect for the cultivated and qualified thinking of historians. This would be the most serious homage and tribute that could be paid to Vlora War and every other struggle and would repay and recompense a huge debt, a really huge debt that has been created by those in the aftermath of each war by seeking to tell heroism they have never committed in order to take advantage of moments and certain positions to align and identify themselves with the true winners of wars they have never fought and, moreover, pass it then down from generation to generation.