Albanians in Italy, exceptional contribution to all sectors of society 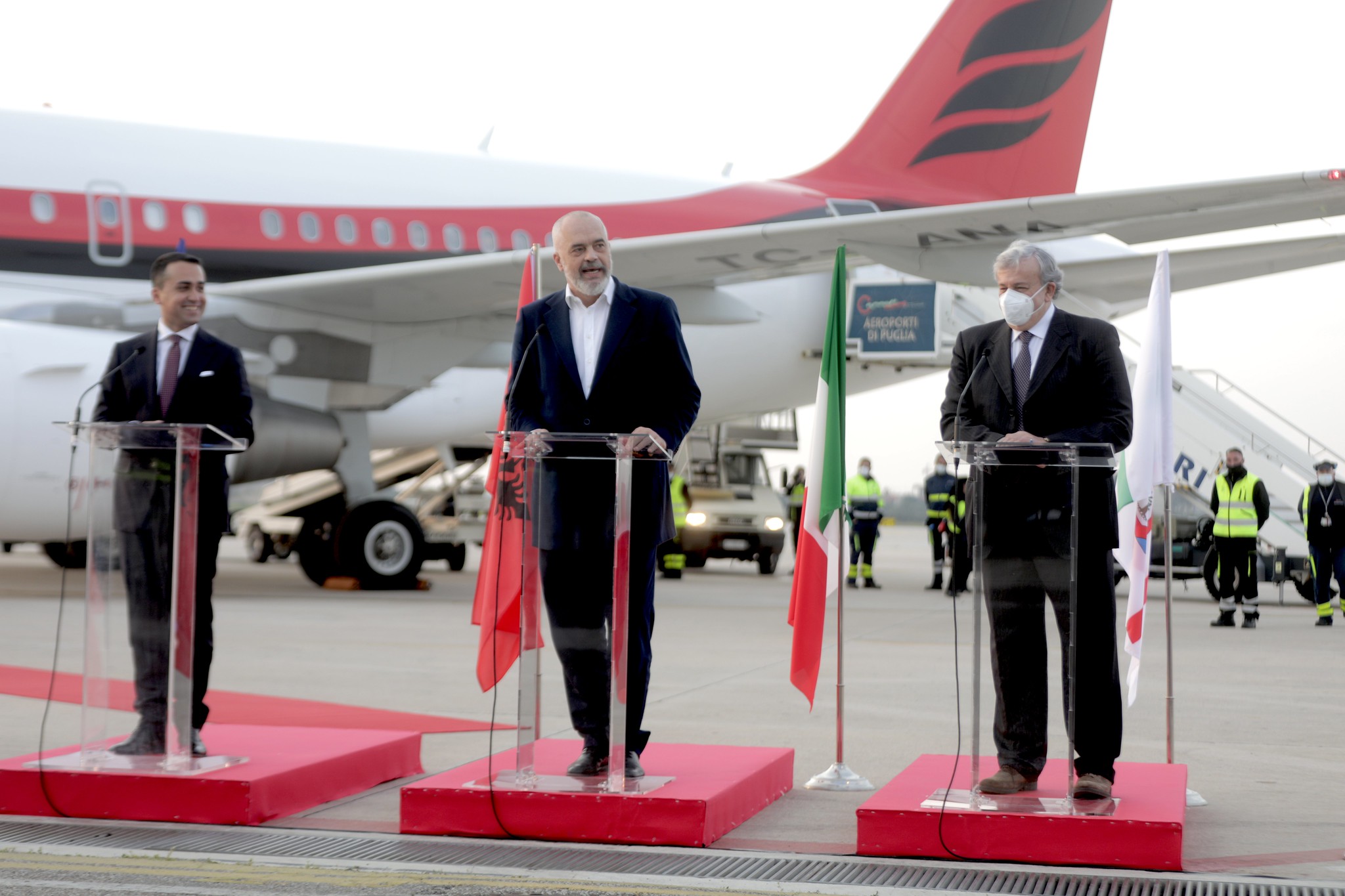 President Emiliano: It is a great honour for the people of Puglia to extend a welcome to the Prime Minister Rama and the Foreign Minister Luigi di Maio. It is a true, an authentic happiness stemming from an old friendship, based on deeds and not words. Having all this said, the Premier Rama would allow me particularly thank the Foreign Minister, who despite incredible pressure and busy agenda didn’t want to miss this special and extraordinary day. A day reminding us all of the desire of the nations to get to know others based on culture, beauty and problems sharing, I mean also the common fight for democracy, freedom, economic progress and welfare, all the things we still intend to deliver in the coming years.

So, these days are a commitment and an oath, if I may use this term, for allegiance and devotion to ourselves for the unwritten man rules and, above all, this  excellent friendship between Italy and, if I may, between Puglia and Albania, which we are seeking to preserve as a very precious thing. Thank you everyone!

Foreign Minister Di Maio: Thank you President Emiliano, thank you Prime Minister Edi Rama and thank you for the invitation you have sent to me!

We are here today to commemorate an important event, the first arrival of our Albanian friends here in Puglia 30 years ago today. The images of thousands of people on board of these overcrowded ships of hope are still fresh in the memory of the Puglia citizens and all Italians, I would say. To many Albanians, Italy meant first and foremost freedom and hope for a better life. We don’t know for sure how many Albanians arrived on the Puglia coast over those dramatic months of 1991, but certainly they were tens of thousands of them. Vlora ship alone, which arrived at the port of Bari in August 1991, carried around 20 000 people. All of them just like thousands of other fellow citizens and compatriots arrived in Italy in the following months, were extended warm welcome and hospitality. The popular mobilization of the Puglia citizens to help Albanian brothers and sisters coming from the other side of the Adriatic was exceptional and it makes us feel really proud 30 years later.

Around 500.000 Albanian citizens live in our country today and they represent an incredible contribution to all sectors of our society. And this is precisely the reason why I am today here with Edi Rama, the Prime Minister of Albania, Italy’s brotherly and sincere friend, and the President of the Puglia region, Michele Emiliano, to remember those significant and touching moments that contributed towards further unifying and bringing together our peoples and that make us think about the future as well.

And it was precisely against this backdrop where Albania’s progressive alignment and rapprochement with Europe, a process that Italy and I personally have continuously supported and encouraged with the hope that Albania’s accession negotiations with the EU will finally open this year.

As we act to provide more perspective to this journey, in the bilateral plan we have developed a unique and profound relationship in all aspects, trade, cultural and social. Italy’s role in Albania is definitely a very special one. Our embassy coordinates a presence that includes the Italian Trade Agency (ICE), a very active Commercial Chamber, the Institute of Culture, the Development Cooperation Agency, the maritime border and financial police office, dozens of teachers and professors, a network of 3000 Italian companies, many of which are precisely from the Puglia region.

Although 2020 has been a particularly difficult year, Italy proved to be Albania’s main partner with 31.4% of the total trade exchanges between the two countries, worth about 2.2 billion euros. Think about it, about 20% of Albania’s GDP.

From the cultural point of view, our mutual and close collaborations are innumerable and I want to particularly highlight the ongoing cooperation between the Puglia Film Commission and the Albanian Cinematography Center, whose director Ilir Butka was one of the Albanians who landed on board of a ship in Brindisi 30 years ago. Today we have so much to remember and celebrate. And we want to do so rhetorically and nostalgically, but by keeping our vision for the future unchanged.

Our path towards cooperation and friendship continues through concrete steps, dear Edi. Italy fully supports Albania, being convinced that Europe must demonstrate to live up to the the aspirations of the Albanians.

Prime Minister Rama: Thank you and forgive me if I feel really moved and exhilarate because of this hospitality, which I would probably deserve as the tallest Italian among the Albanians, but nevertheless I feel honored to be among the two best Albanians among the Italians. I am saying this to describe their generosity towards Albania, not only when there is sunshine and when the sea invites us, but also when there are moments, those difficult moments that point out true friendship.

As I was getting off the plane, I noticed this exceptional welcome and the first thing to come to my mind was an Italian song, with its lyrics, if I am not mistaken, as following: “the years pass amid storms and pain.” And it is 30 years since Albanians took to the ships to reach the other side of the sea. And a lot of things have happened in 30 years, with many storms and pains affecting Albanians, but very honestly also a lot of generosity, a lot of Italy for Albania. I am pretty sure this period of our history won’t be forgotten by future generations.

What I would like to utter at this moment are many thanks to all of those Italians and Puglia people in particular, especially the ordinary people and their families that opened their doors to welcome in those strange and completely different people, who even scared them sometime, and it was that fear being later used to embark on hatred campaigns, yet hatred didn’t prevail, but the spirit of generosity and the spirit of solidarity of the Italian people and their institutions won.

The spirit of the institutions that have been close to Albania over all these years and despite the colour of those who have governed the country from the political point of view, there has never been a color in our 30-year relationship, except those of love and friendship.

Without wanting to become pathetic, I would like to thank Luigi also for what he has done personally, as well as for what Michele has done when, 15 months ago, Albania was hit by a devastating earthquake. Italy stood with us through its incredible firefighters, but especially through its presence in our territory, as well as in Europe to honor all the beautiful words spoken during these 30 years, such as “Albania is part of Europe “,” Albania is Europe “and” For Italy, Albania is just the rest of the same sea.”

I would never be able to properly thank these two people for their commitment, the way Luigi was involved  by becoming truly the most fervent advocate of the Albanian people at a very dark moment, but not just in that moment. Throughout his journey, he has truly been a five-star friend!

I hope we would be able to live up to this friendship. I wish you would never need our help, but if necessary, we would be there, honoured to stand by you.

I would like to conclude by recalling the figure Luigi mentioned. Half a million Albanians live and work, also contribute to the Italian company today. There are 50.000 small and medium enterprises founded and run by Albanians, who provide their contribution to the Italian taxes. Thousands of Albanian young people attend Italian universities and since Italian is natural to us as a second language they are always advantaged compared to the German, Dutch or other students, who attend universities in Italy. It does not happen often in other countries, but in Italy we are at this level: first in perfection.

And this all has been made possible thanks to everything I already mentioned, thanks to this incredible readiness, which has its roots in the Italian tradition, the history of Italy and definitely in the Italian spirit.

I would add nothing more, but since a number of journalists are here and since they have been bombarding me with their questions for weeks now, I hope the Ambassador would forgive me for breaking the protocol and take a few seconds’ time to ask Luigi to personally take care of the issue of the driving licences of the Albanian citizens in Italy as the process seems to have been stalled in the very special corridors of the Italian bureaucracy. That issue should be removed from there, so that Albanians could drive their cars legally, because, just like Neapolitans, we Albanians are promptly ready to drive without a license. We cannot allow this.

Minister Di Maio: No, we can’t allow this happen.