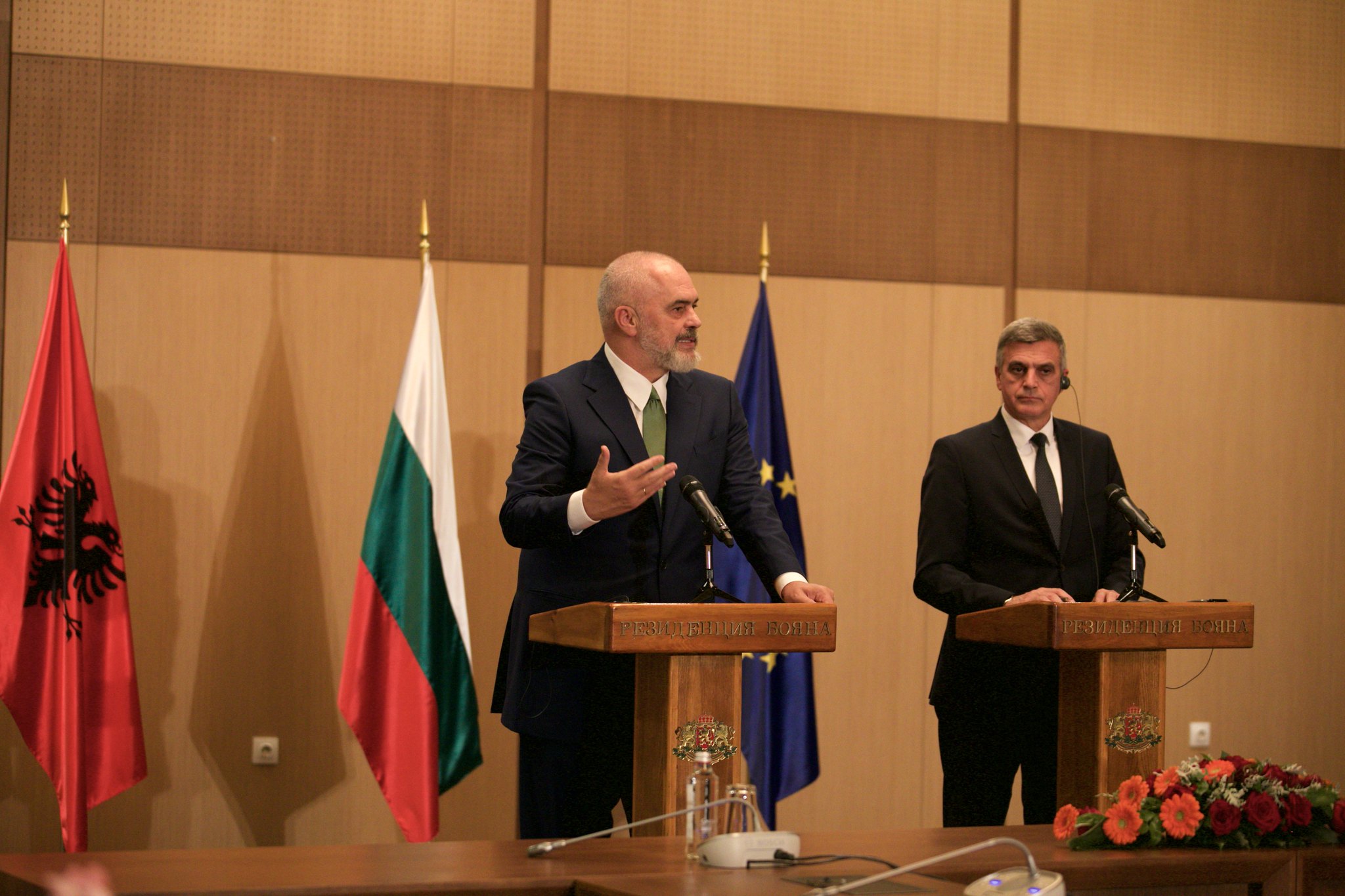 PM Stefan Yanev: I have the honour of informing you about meeting with the Prime Minister of Albania, Mr. Rama.

We discussed the bilateral relations and it is our common view that our relations are developing incredibly very well and, to some extent, our bilateral ties can set an example showing how the good neighbourly relations can develop.

During our talks, we both observed and highlighted that we have no pending or open issues that would take serious discussions and practical solutions. The solutions already in place are practically working, they are stable and our relations are in the best context and interest of our two nations and countries.

With the Prime Minister Rama, we draw attention to Albania’s Bulgarian minority that can serve as a natural bridge between the two nations. Our compatriots in Albania are best integrated into the Albanian society, both in economic and social terms, and by developing joint projects, the Bulgarian and Albanian states demonstrate their readiness for better bilateral ties. There are no differences among us in this respect and I can admit we found sensitiveness regarding the topics we discussed, including Albania’s European perspective and its Euro-Atlantic affiliation.

Speaking of Albania’s European perspective, we should also highlight the fact that Bulgaria’s position regarding the Republic of North Macedonia, to some extent, represents an obstacle to Albania’s faster perspective.

We very much hope that Bulgaria’s position as one of Albania’s European partners won’t make the public opinion think that Bulgaria is doing something that hinders the country. On the contrary, our position has been clearly shown through our declarations that we support European future of North Macedonia and Albania, but the position of the Bulgarian parliament is exactly the one that Bulgaria defends in the international relations and which is hopefully now better argued and explained to our European partners, as it stipulates that the bilateral issues we have to address with North Macedonia can be addressed bilaterally only.

The need for a foreign intervention or advices are not a good idea, because this is a discussion taking place between two countries and it is both the Republic of North Macedonia and the Republic of Bulgaria the ones that should find a way of dialogue and constructivism. This way we would confirm through real deeds what has been already stated over the European perspective.

Such a position should be best explained to our European partners and the goal is that bilateral issues do not become a matter for concern within the family of European states and it doesn’t set a precedent when European problems are resolved in the European diplomatic area.

Thank you for your attention. I will now give the floor to the Prime Minister of Albania, Mr. Edi Rama.

On the other hand, I would also like to thank you for highlighting the fact that Albania is really a model of coexistence and treatment of minorities and we feel really good that after an initiative we launched few years ago, our legislation on ethnic minorities is at an excellence level in full compliance with the principles and the standards of the European Council and the European Union itself.

And in this context, I am very pleased to notice that anytime I meet Bulgarian friends, government representatives or representatives of various political parties here or in Brussels, they all underline the fact – as you also did few minutes earlier, as well as during our conversation – that Albania’s Bulgarian minority enjoys full rights, it is fully integrated and feels totally free to cultivate the part of heritage that needs to be passed down from generation to generation. And this is a very significant example showing how a minority, though small in size, becomes a bridge connecting the two countries and people.

I would say “Yes”, it is very important, it is absolutely important to us as Albania to see this issue resolved. We are aware this is a very sensitive issue here, as well as in the fraternal country of North Macedonia. However, we are involuntarily involved in all this, as you all know that both Albania and North Macedonia expect the European Council’s decision on formally opening the accession talks through the first intergovernmental conference. Taking notice of the current situation, I strongly believe there is sufficient potential for the two countries to enhance communication, dialogue and resolve this issue jointly. There are so many things that bring the two nations and people both in Bulgaria and Macedonia together as two countries with a common future. Regardless of how difficult such issues can be, there is always a solution when there is good will.

On the other hand, I would like to underscore that Albania is respecting this. We will continue marching along with North Macedonia for now, yet questions remain; How long it will take and how long we should still wait? But, as I said, we are OK for now and even though it is pretty clear we have fulfilled all the conditions and there is nothing standing on the way to open the first intergovernmental conference, at this moment we will respect, as I already stated, our two friends and the two friendly countries that should resolve this issue. Of course, we strongly believe and I strongly believe this is something that should be addressed by the people and the leaders of both countries, because, although others can certainly help, I don’t personally think that others can do or replace what both sides are supposed to do and should actually do, hoping this will happen as soon as possible.

I know that a caretaker government with a very clear activity framework is currently in office in Bulgaria. The country is about to hold fresh elections and such issues tend to become even more difficult. However, I believe that Bulgaria, as a EU member state is now mature enough to recall the time when for various reasons once found itself in same position and work together with North Macedonia do get out of this situation. This is my approach to this issue. Thank you!

–Do you support the border change in Balkans and, according to you, should Serbia recognize Kosovo independence instantly?

And last question: Bulgaria is asking for guarantees in order to complete the agreement with North Macedonia. Do you support Bulgaria’s position on this?

PM Edi Rama: (Serbia) should have recognized Kosovo long time ago and every day that goes by it just delays what is actually the right thing to be done, but I hope that mutual recognition will come sooner rather than later through dialogue and understanding the mutual interests.

As far as the second question is concerned, I would say that our position as Albania is a position that nobody should envy. We are stuck between two friends and for reasons that have nothing to do with us, but things are the way they are and the process has been built in a way that should be respected the way it is. We are here to side with nobody, but we are here just hopping and supporting the fact that the two sides will talk and address this issue. We are of course ready to help, yet we could just help by keeping urging both sides, please talk, please communicate, please find a way out. This is because such issues, as history has told us, could become increasingly complex. The more you talk about them, the more complex they become should there is no direct communication, if there are no direct talks, if there is no common will to resolve the issue and shake hands face to face and not through third parties. Of course, the EU is making extraordinary efforts. Everybody is trying to support and encourage, but eventually it is the Bulgarians and the Macedonians the ones who should emerge together from this situation. 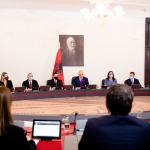 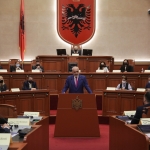 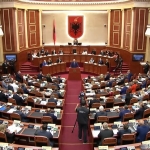 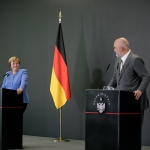 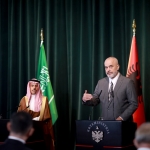 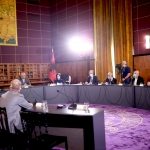 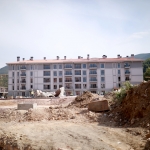 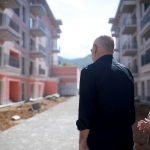