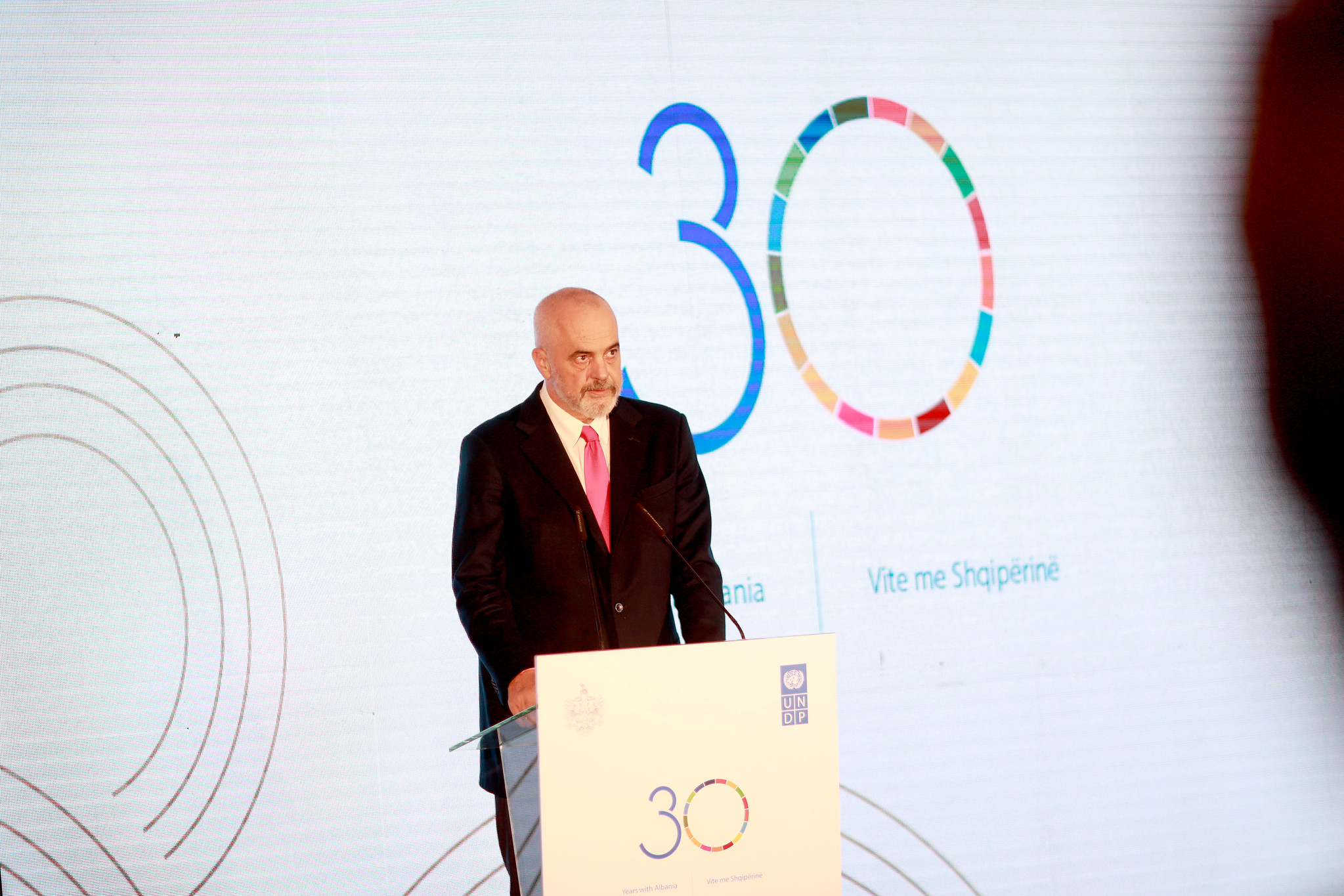 By the way, they have written a very long speech for me to read here, but I would try to sum it up as briefly as possible, but frankly speaking this is something I find really difficult after the speech delivered by the Swedish Ambassador, who set a specific tone to this stand.

And by the way, it is the first time I see a stand inside a room, but considering who this house belonged to, this stand becomes indelible and noteworthy.

Back then, the UNDP’s sole purpose was to give as much oxygen as possible to the country going through a dramatic change that, along with freedom, posed a mountain of challenges and difficulties.

It is really almost unimaginable that in the span of a lifetime we have been lucky enough to witness two worlds so different from one other; the world of the past, when even though we were members of the UN there was no interaction of whatsoever with the UN Development Programme and the today’s world and the future concurrently, when again in the span of a lifetime Albania is a non-permanent member of the UN Security Council.

On the other hand, many things were highlighted here. Many things have been accomplished over the last 30 years under the collaboration between the Programme and the government and, for the sake of truth, what makes an impression when looking at the long list of the accomplished things is the fact that the Programme has been always there at the most critical moments, at the key moments of this incredible process of the country’s transformation from a totally isolated dictatorship to a democracy under construction.

And indeed, the Programme was present with the opening of the first public administration school.

The Programme was present at the time of the 1997 riots, when the weapons in exchange for development initiative was piloted under the UNDP Programme.

The Programme was present at the time of Tirana’s historical turning point, when after 10 years of unprecedented chaos and unimaginable urban deformation as a result of uncontrolled demographic flows to Tirana and the absence of law and order, we embarked on a new journey, in a bid to restore the city to the people, trying to give people a sense of public space, no longer happening there as a result of the complete lack of private property, but of public space as an access space in between the citizens’ private properties.

And thanks to the Programme we have not only had the opportunity to make some important interventions in financial terms, but we have also had the opportunity to interact with an organization which other than money, in my view, has the know-how and capacity to transfer know-how regarding everything that has to do with organization from the way a concept is presented in a project to implementation of a project, things that may seem to everyone of us to have always been there, but in fact they haven’t always been there and we had to learn all these things in the same way as the children learn primer step by step and in this case, not 1, 2, 3 or 100 individuals, but an entire society had to attend a course against illiteracy in relation to democracy and not to literature. I believe that the program has played an unforgettable role in the history of our country. I believe this is an aspect the Programme has to be credited for with its indelible contribution to our country’s history.

Likewise, the Programme has been present in some pivotal moments when we had to conceptualize reforms with profound impact, from territorial administrative reform to justice reform. One must not forget and it is worth noting that the Programme was also present when we had to cope with the floods, becoming an easily accessible bridge between the EU and the Albanian government, as it is actually today part of a major post-earthquake reconstruction pipelining all the pledges and contributions of various donors and in particular of the largest donor in this case, which is the EU.

For all these, I believe that the Programme remains a pivotal factor of specific importance to the life of our country, to the life of our society, to the life of politics, in the sense of supporting all the efforts of decision-makers on the path of implementing their decisions, from decisions on reforms to the decisions designed to address even dramatic needs, such as those in the 1990s, those in the early 2000s, or those still in front of our eyes, when we consider that we still have a long way to go to ultimately complete the huge reconstruction program and to leave a tragedy behind by creating the opportunity that everything that was left in ruins will be built back better and more resilient than before the earthquake, and provide better living conditions for the affected people.

I stand no chance of delivering an equally great speech like the one delivered by the Swedish Ambassador, because I haven’t actually had a love story with the UNDP and I am somehow disadvantaged in this respect, but nevertheless, I believe that in this case, it is not irrelevant to count the things already done and I mentioned just a few of the many things we have done and while going through exactly the entire list of the accomplished things, I had the feeling of a worker ant. The Programme is just an ant vis-à-vis the huge elephants already present in the country, but for the first time not present in this room to take the floor. The Programme is like an ant that steadily and through a constant pace succeeds in delivering and carrying out unimaginable work compared to its size and therefore the Programme deserves respect, gratitude and more appreciation.

I don’t know what the Programme would have been capable of doing if it were to enjoy the capacities and opportunities of the elephants. Perhaps it wouldn’t succeed in doing what it actually does, because the ant is quite aware that there is no other option, but compensate with sustainability and at a constant pace and with exceptional patience what nature has not gifted it, but at the end of the day, or at the end of its journey, it is a known fact that the volume of work done and the quantities of the payloads compared to the unit the ant represents, are exponentially larger than the amounts of cargo larger bodies and entities can carry.

Thank you very much for the invitation!

Thank you so much for everything you have done for our country!

I am sure that as in the past there have been others, there will be others in the future too, but what is going to will be the presence of the Programme in Albania and of course it will become more and more difficult for those to come to choose which to mention among the many, many things you will surely keep doing.

Thank you very much!