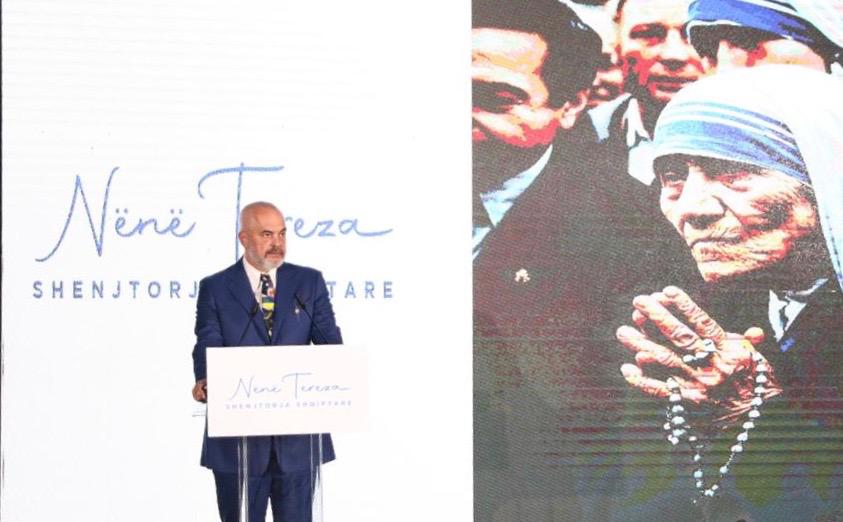 I am truly grateful to those who worked to stage this exhibition, featuring a modest yet incredibly significant number of artefacts on display. Such are the three handwritten letters by Mother Teresa, where not only the closely watching the authenticity of these three precious manuscripts, but also their content, clearly reveal something that is often questioned about her origin.

“My dearest of people of Albania! Remember that God created each of us for greater things: to love and to be loved. This is the meaning of life, which no suffering can remove from our minds… “- is an excerpt of the letter dating March 1997, when Mother Teresa addressed a final message to her people. And she entrusts this message to her friend, Monsignor Paolo Hnilika, as one of the people closest to Mother Teresa, who later testified to the great love she felt for her family and homeland.

Mother Teresa had asked Monsignor Hnilika several times whether he had handed this message over to the Albanian authorities, because, as her friend in life and her brother in religion testifies: “she very much wanted her people to receive this message.”

Further on, the exhibition about to open today, which showcases three manuscripts, respectively in August 1989, October 1989 and January 1990, addressed to Ramiz Alia in his capacity as the then President of the Republic to allow her visit in Albania and launch her mission in our country later, offers the extraordinary taste of reading Albanian excerpts she wrote with her own hand, dispelling any doubts expressed by certain scholars and later turned into banal arguments regarding the first and mother tongue of Mother Teresa, according to whom, she never wrote in Albanian after the ’70s.

“My heart has a great desire to come to Albania,” she writes in Albanian in her letter. “I have given the Albanian word of honour and promise to God to cherish love and peace over the whole world”; and the letter indeed clearly contains both elements or sides of her identity, her national identity and her universal identity, her identity as a daughter of an Albanian family, surrendered to God and self-transformed into a daughter of all families in need all over this world.

We know that Saint Teresa visited Albania for the first time in August 1989 and I remember, at least everyone of us, how much emotion, mixed with great curiosity, as well as a strong feeling of solemnity her landing brought in Tirana, where the opportunity to follow her during her stay was not like the opportunities of today, because there was only one national broadcaster and the airing time of her visit was very limited on the program of that state television channel, we were all proud and very overwhelmed by that visit.

I do not want to take more of your time to say things that while speaking about these letters specifically at this moment would be superfluous, as commenting on Mother Teresa is a very dangerous ground, also due to the fact that in many her few words one feels a simplicity, an extraordinary depth and weight, a clarity and the essence of the relationship of people between them.

I would like to go back precisely to this very essence in view of what, according to me, is one of the most wonderful sources of inspiration for anyone who loves or feels the need, or understands the need to leave a mark on the path of his life, the life given to us temporarily, in her words, in very few of her meaningful words: “It’s better to light one candle than to curse the darkness.”

It is indeed a quote I personally feel it echoing often, especially at moments when you better light one candle, i.e., doing something is only a bit compared to a lot that should be done, but, in fact, it is step by step, something after something that leads to everything in individual life, even in social life, and is the only appropriate thing you can do instead of dealing with the darkness that holds you back from taking those sparks of light forward to create then more room for the light and shrink the place of darkness.

It is often misused just to gain audience. It is often misused to minimize, or worse, through mud at good though insufficient efforts that are being made. And I believe that Mother Teresa’s quote: “We have the heart to love and the hands to serve,” is the right word to describe this effort to bring home, much better, stronger and safer homes, all those who had the misfortune to lose shelter on that tragic night.

To conclude the entire framework included in this exhibition, I would like to add that her October 1989 letter was unprocessed in the State Archives as part of the unprocessed fund of Ramiz Alia and the processing of the archive of that time ended only in 2020. 30 years to process a treasure trove of information for everyone wishing to study and look into this part of our history, referring to authentic documents, including these letters, with that of October 1989 becoming known only recently.

The two other letters, respectively written in January 1990-të and an earlier one in August 1989 are widely known, but I would like to cite an excerpt from her August letter, which I think would elegantly end this beautiful moment we are experiencing together. Written on August 16, when she asked the then President to allow her bring to Albania at least four of her sisters, missionaries of charities to render love and care for lonely and elderly people, saying:” “I have neither gold, nor silver, but I will give you my sisters and I hope together we will do something beautiful for God and for our people.”

Thank you very much!