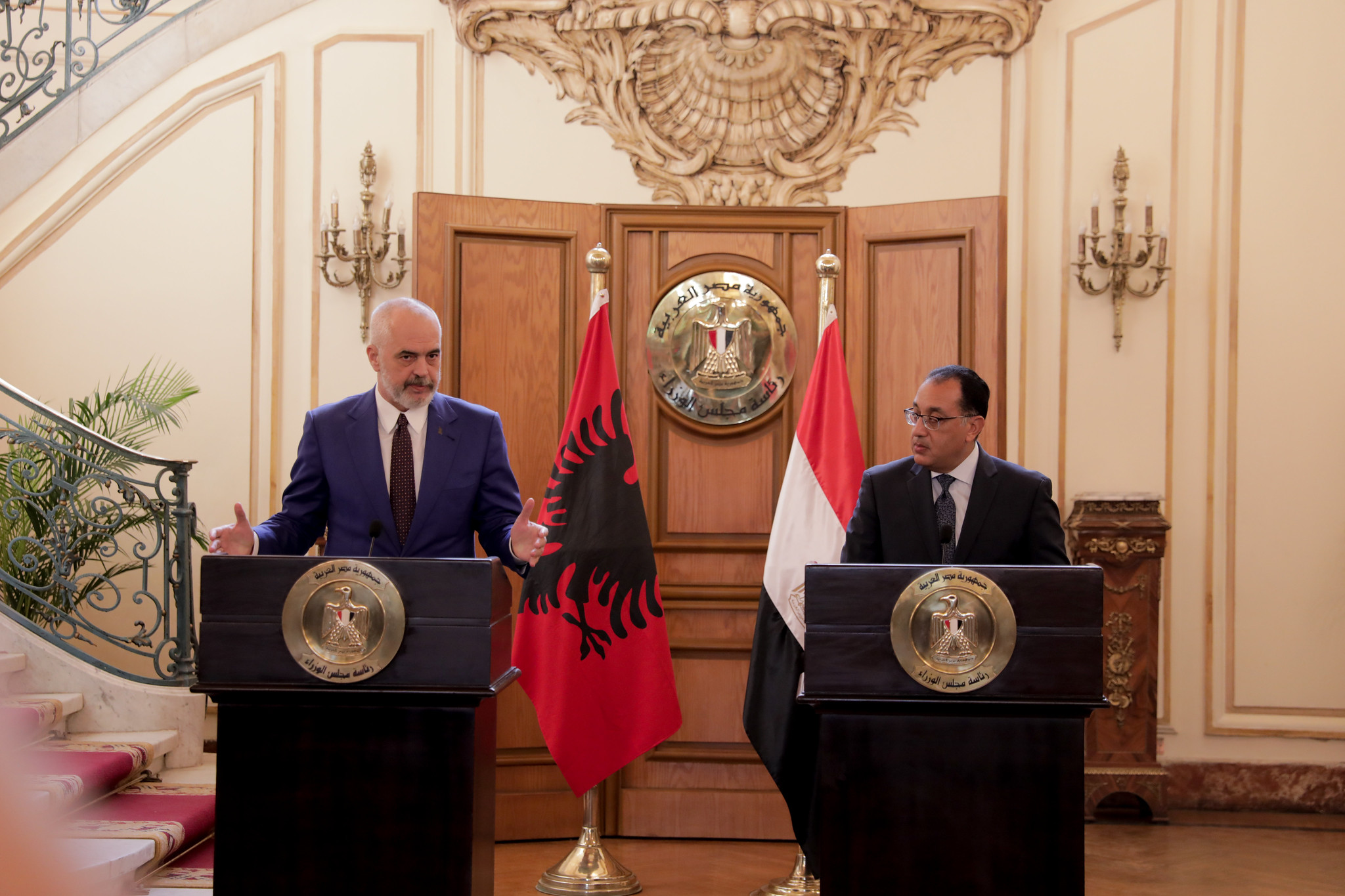 Prime Minister Edi Rama is on an official visit to Egypt, where he held a meeting with the Prime Minister of the Arab Republic of Egypt, Mostafa Madbouly.

Egyptian PM Mostafa Madbouly: Your Excellency Mr. Edi Rama, Prime Minister of the Republic of Albania, it has been a great pleasure and honor to meet with your Excellency and, of course, with your distinguished delegation today.

This today’s significant visit echoes the excellent and historic relations between our two countries over the decades. We had important talks today, we also examined aspects of bilateral cooperation and we exchanged views on a number of regional and international issues.

We had the honor to be extended a welcome by His Excellency, President Abdel Fattah al-Sisi, with both sites once again emphasizing the excellent relations between our two countries.

Being located at the heart of two important regions, namely the Western Balkan and the Middle East, our two countries play a crucial role in ensuring stability in both our regions. Together with His Excellency we explored the potential areas of cooperation in the coming years.

At our today’s meeting, together with His Excellency the Prime Minister, we discussed ways to boost and strengthen relations between our two countries and our talks also focused on enhancing cooperation in various areas, including tourism, energy sector, trade and culture.

We also exchanged views on international issues, discussed the importance of the first session of the Joint Committee for Economic, Scientific and Technical Cooperation due to be held in the capital Tirana next month.

I am confident that the next month’s meeting will serve as a supportive framework for joint relations between the two countries, and will also enhance, in particular, economic and investment cooperation. I also put emphasis on the importance of setting up a joint Egyptian-Albanian Business Council between the Egyptian Businessmen Association and the Albanian Federation of Chambers of Commerce and Industry. The Council will help to take our relations forward in the future.

Following our talks, we witnessed the signing of three memoranda of understanding that include a number of aspects of cultural cooperation.

To conclude, I very much hope the visit will represent a turning point towards stronger ties between our two countries at all levels. Egypt is looking forward to capitalizing on this moment, strengthening our relations and boosting our bilateral cooperation. Once again, Your Excellency, Prime Minister Edi Rama, I want to thank you and wish you a pleasant tour tomorrow, as you will be visiting and witnessing some of the most extraordinary achievements here. Thank you very much!

On this occasion, I would like to note that Egypt, which we see today with its strength, toughness and strong influence in the region, is the result of the wisdom and insightful vision of President Abdel Fattah El-Sisi and your government. We must not forget that for many decades, especially in the 19th century, Egypt it emerged as the American Oriental dream, with countless opportunities the cotton cultivation offered, combined with the brilliant vision of a rare strategist, a general, Muhammad Ali.

The very origin of this man himself, who opened this country’s doors to modernity, was a real mosaic in itself. Born into an Albanian family, and involved in the high ranks of the Ottoman Empire, a follower of genuine Islam who sees immobilization as something that the Prophet, peace be upon him, rebuked and also the interaction between cultures and countries as an obligation of Muslims.

The general led the country towards developing a consciousness that while it was to take the destiny into its own hands, it would often become also the arbiter of the destinies of an entire mosaic of regions.

I am honoured and filled with pride to be here today to talk about our early roots and the extended friendship that binds our two countries. I wouldn’t like to comment on the past or the pathways Muhammad Ali opened up to all Egyptians through their determinant actions, but I would like to briefly comment on the rest that that because of his immensely compelling personality, has sometimes or always somehow shadowed.

Being among Albanian generals and commanders, Muhammad Ali didn’t limit himself to these Albanians only, but instead he named an entire street in Egypt to Albanian workers and entrepreneurs, not just Albanian fighters. Egypt, your homeland, welcomed many Albanians, emigrants from Shkodra which is our northwest, without forgetting Korça, a region in the southeast and with the same open-minded attitude he did the same by welcoming the Italians, French, Greeks, Jews and others.

I must recall here the fact that Albanians, be them either Muslims or Christians, Al Azhar students were craftsmen, merchants, administrators or even doctors. Let me recall here the very interesting example of an Albanian, who was a prominent personality of Albanian independence. Doctor Mihal Turtulli, a Christian, was the personal physician of the Khedivate family and after many attempts saved the life of Khediv Abbas Hilmi II, after an assassination attempt against him in 1900. There is no doubt that this man from Korça would give his life for this excellent Khedive and there is so much other minor evidence demonstrating this relation. By the way, in 1899 Abbas Hilmi II, the successor of Muhammad Ali as ruler of Egypt, helped another important Albanian personality, Murat Toptani to live with patience and dignity in exile. In doing so, he carried on the tradition he inherited by his ancestor, to lend a hand to all initiatives to help Albanians.

Of course history is worth it, it matters and once again I am proud to say that the Albanians gave their contribution to this country, but they also benefited a lot from this country and this makes us humbly grateful for what this country has done for them.

There are many articles, poems as evidence from the past to the present day and that have been passed down from generation to generation, conveying the feeling of love, friendship and belonging to this country.

Speaking about the nowadays, honourable Mr. Prime Minister, now it is up to us to build on that cooperation and strengthen our relationship, and I would like to thank you for your enthusiasm to move forward to hold the meetings of the Joint Committee, to determine the forms of cooperation in the areas that we wish to provide more support for the areas we need to promote most and do a lot more, since, as you already noted, that data on the trade exchanges between our two countries are too modest, while the potential is for a lot more.

So I pledge to personally commit to establishing a direct flight route between Cairo and Tirana and vice versa. I do not know about the Egyptian side, but I assure you that the planes flying from Albania will never be empty and this airline will not be a burden for the company, but quite the opposite, it will help many Albanians who want to come, visit Egypt and spend their vacations here, to come to this land and to realize that once upon a time Egypt was like the back door of our homeland even though the distance was much greater back then.

Without wanting to take up too much of your time, I would like to thank you again and conclude by hoping that what is perhaps the most precious distinguishing feature of Egypt, your extraordinary culture, will also be the basis for our cooperation in the cultural field.

We are much smaller, but we are proud of our culture and we believe so we have something to tell your people. Of course you have so much to tell our people so let’s work together, let’s look forward to the future being confident that there has certainly been a reason that history has bound us so strongly and let’s turn this reason into a conviction that it is in some way the legacy of the ancestors will be a way common towards the future between Albania and Egypt, between Albanians and Egyptians.